My Favorite Apps in Costa Rica

My Favorite Apps in Costa Rica

Whether you’re vacationing in Costa Rica or living here, there are several apps that, in my opinion, are worth having on your smartphone. I use all of the apps mentioned here on a regular basis. Of course determining which ones you use will depend on your own likes and needs.

Let’s begin with Google Translate. My Spanish is very limited (poco de español) to say the least, and Google Translate has helped me the most out of all of the apps. Of course, if you decide to live in Costa Rica, it’s best to learn Spanish because you will interact with the locals and life will be much more enjoyable when you can communicate. Google Translate is the world’s number one translation software. It supports 103 languages and 10,000 language pairs, and it processes about 500 million translation requests every day. Google Translate works with both text and voice.

My next favorite app is WhatsApp, which is used widely in Costa Rica and is currently the most popular messaging app in the country. It’s user friendly, so you do not need to be a geek in order to understand how it functions. WhatsApp allows you to share your location with a desired contact. It also has audio and video calling functions, much like Facebook Messenger. You can schedule a doctor’s appointment, summon a taxi or shuttle service, chat, or call your friends in Costa Rica or internationally. I love this app because if you don’t speak Spanish and the other party doesn’t speak English, you can translate their text message in Google Translate and then send your response to WhatsApp and—voila!—you’re good to go.

Waze is an app I use on practically a daily basis, especially when I’m out and about on the town or traveling. I like Waze much better than Google Maps because it loads more quickly. Waze has a strong community of users who share information, such as restaurants, hotel locations, and a host of other real-time data. Waze gathers information and is fast, ensuring that you get the fastest route.

We regularly use buses and taxis to get around town, but we also use Uber, which works in Costa Rica pretty much the same as it works around the world. Uber makes it possible to secure a car via a smartphone from any location. Using the Uber app, you can hail a car, have it arrive within minutes, and pay for your ride by linking your credit card to their system via the app. Easy peasy, especially as we are becoming a cashless society. One drawback, however, is that this technology has reduced the market share of traditional taxi services and lowered drivers’ overall profits.

The last app I want to discuss is XE Currency Converter. Currency rates change minute by minute, and it’s important to know the correct conversion rates when you’re buying goods or services. XE Currency Converter is everything you need for international currency exchange rates, and it allows you to monitor up to 10 currencies, such as Costa Rican colones to US dollars. 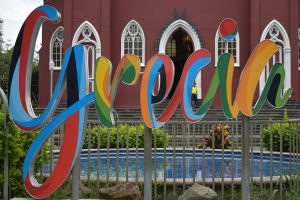 I love this place!  The first time I visited Casa[...]

I’ve wanted to visit La Paz Waterfall Gardens ever since[...]