Adrian dropped me and Tezzy off at the Villas Macondo complex at 12:30 pm, and we proceeded to check in. We met the owner Tom, a very nice German fellow, who gave us all of the necessary information to make our stay comfortable. The Villas Macondo complex is just 500 feet from Tamarindo Beach and features an outdoor pool, tropical gardens, and free Wi-Fi. Each air-conditioned room has a terrace with a hammock and garden views. Local and international restaurants can be found within a 5-minute walk.

Today was typical for this time of year: hot and humid. Upon arriving, I texted my friend Marcus, who is vacationing from Switzerland. His room was right across from the swimming pool. As he was a bit hungry after his trip, I went with him to a restaurant around the corner called Tierra BenditoI. I really wanted a cold cerveza (beer), but they didn’t serve beer, so I had a coffee instead. Meanwhile, Marcus enjoyed a Caribbean chicken casado. Afterwards, we headed back to our rooms to get a little rest before meeting up again later that afternoon to explore the beach area in beautiful Tamarindo.

Walking down the streets, it is clear this is a hot bed for tourism in Costa Rica. Many tourists, expensive clothing boutiques, and upscale restaurants were everywhere. The beachfront restaurants were full of patrons, and the Caribbean reggae music was banging. The whole vibe was exhilarating! Tamarindo is different from all the other places I have been. It has its own upscale beachtown vibe, and I was digging it. I realized that most of the locals in Tamarindo—at least the ones I met—speak perfect English. Perhaps that’s due to so many English-speaking tourists in the area.

We stopped in at the El Be Club! on Tamarindo Beach for a beer during happy hour and to enjoy the music and scenery. A glance at their menu showed very high prices. We didn’t want to pay such exorbitant prices, so we finished our beers, caught a beautiful sunset, and bounced out of there. We made our way a few kilometers down the beach to Nogui’s Restaurant, where the prices were more in line with our wallets. Tables and chairs were set up right on the beach, and we dined on delicious pescado (fish) while listening to the waves in the background and enjoying the light of Hawaiian-styled fire-lit torches. The only distraction was that I could smell the aroma of strong marijuana a couple of times during our dinner.

At the end of our first night, we strolled down the street and around the corner, heading back to our rooms.

Day 2 – Tezzy and I awoke early after I had one of those “sleepless in Tamarindo” nights due to some aching back pains that had plagued me a little the day before. In the end, I managed to get at least 7 hours of sleep, but it was a rough night as I was forced to sleep in a patio chair with my feet propped up on the bed. About 6:30 am we headed over to the Villas Macondo’s kitchen area to grab our first cup of coffee. Did I say “no leche (milk)”? The first cup was black—ugh! Then Tezzy and I took a walk down the street and around the corner to Tierra Bendito, where I’d had a coffee the day before. We enjoyed a delicious, inexpensive breakfast. I tried their Caribbean chicken, and it was tasty with a bit of hotness.

After breakfast we ventured down to the beach, which was only steps away. We soon spotted Marcus, who was taking an early morning walk. Tezzy finally got her chance to ride a horse, something she’s always wanted to do. She spent about an hour riding along a stretch of the beach. After Tezzy’s ride it was a little after 11:00 am. All along Tamarindo Beach are tons of open-air restaurants, and we stopped in at Tama Onda Restaurant. Marcus said he didn’t drink before 5 o’clock, but I pointed out that it was 5 o’clock somewhere, so we proceeded to order some ice-cold beers. By that time, my back had started to act up again, so we headed back to Villas Macondo in the hopes that I could possibly find some pain relief.

Many people will lead you to believe that Costa Rica[...] 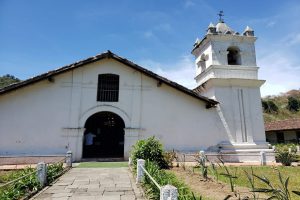 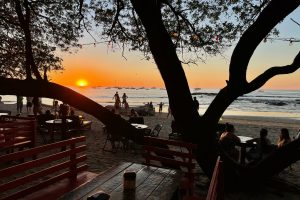 On most days, when I awake to the birds chirping[...]